Paul Preston, President of New California State addresses the concerns and goals for the event at Roseville Veterans Memorial Hall on Jan. 26, 2019. (Nancy Han/NTD) ROSEVILLE, California—The New California State movement held its third Constitutional event at Veterans Memorial Hall in Roseville, California, on Jan. 26. The self-governed legislature is a statewide grassroots effort to free most of California’s rural areas away from the current state and form a new one. So far,

In Venezuela use of energy is counted by the minutes and hours. You never know when you will be able to read at night or work during the day. Socialism kills an economy. “History has shown the State has a long history of failure in taking on large tasks beyond their reach. Just ask the DMV, Caltrans, Coastal Commission, and other regulatory agencies whose incompetence is a major contributor to increased construction costs. Unquestionably, this has been a major factor in cre

New Nevada State Declared their Independence today becoming the second state following in the footsteps of New California State. The U.S. Constitution provides a process for citizens to declare their Independence when a state government is not adhering to the freedoms guaranteed in the US Constitution but instead rules by decree which is a form of tyranny, a dictatorship. Please watch for the live show of this historic event.

Linda Paine, president of EIPCa, As many as 1.5 million inactive registered names on the voter rolls in Los Angeles County alone are being contacted for potential removal, after the recently-announced settlement of a lawsuit against the state of California and Los Angeles County initiated by Election Integrity Project California (EIPCa) and Judicial Watch. Inactive voters who have not voted in two general federal elections will receive a postcard in the mail, and if the postc

Associated Press President Donald Trump said he’ll be making a “major announcement” on the government shutdown and the southern border on Saturday afternoon as the standstill over his border wall continues into its fifth week. The White House declined to provide details late Friday about what the president would be announcing. But Trump was not expected to sign the national emergency declaration he’s been threatening as an option to circumvent Congress. ___ HITTING HOME The p

Police officers from across the country came together at Friday's memorial service for a 22-year-old rookie who had long dreamed of being an officer and was slain just weeks into the job in a Northern California college town. The service for Davis Police Officer Natalie Corona, who was shot and killed last week, will be held at the University of California, Davis. UC Davis said it expects up to 6,000 officers, in addition to family members, friends and members of the public.

The first meeting was held last night at the Nye County Republican Central Committee headquarters for a group who would like to declare their independence from what they call. “Old Nevada” They hope to go forward with “New Nevada” and be “Battle born again” 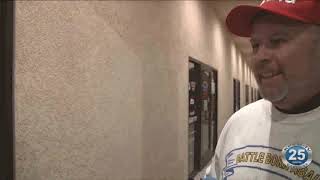 Puerto Rico and New California State could be the next two states admitted into the Union. A U.S. Bankruptcy Court decision wiping out half of Puerto Rico's general obligation bonds represents a potential Death Star precedent against Wall Street buying municipal bonds from states without a balanced budget. The reason that high-tax rate and potentially insolvent states like California, Illinois, Connecticut, New Jersey, and Maryland have continued to have access to massive new
{"items":["5f81ae263d91060017b30d8d","5f81ae263d91060017b30d8e","5f81ae263d91060017b30d8f","5f81ae263d91060017b30d90","5f81ae2690fbba0017601cbc","5f81ae2690fbba0017601cbd","5f81ae2690fbba0017601cbe","5f81ae2690fbba0017601cbf","5f81ae2690fbba0017601cc0","5f81ae2690fbba0017601cc1"],"styles":{"galleryType":"Columns","groupSize":1,"showArrows":true,"cubeImages":true,"cubeType":"fill","cubeRatio":1.3333333333333333,"isVertical":true,"gallerySize":30,"collageAmount":0,"collageDensity":0,"groupTypes":"1","oneRow":false,"imageMargin":32,"galleryMargin":0,"scatter":0,"rotatingScatter":"","chooseBestGroup":true,"smartCrop":false,"hasThumbnails":false,"enableScroll":true,"isGrid":true,"isSlider":false,"isColumns":false,"isSlideshow":false,"cropOnlyFill":false,"fixedColumns":1,"enableInfiniteScroll":true,"isRTL":false,"minItemSize":50,"rotatingGroupTypes":"","rotatingCropRatios":"","columnWidths":"","gallerySliderImageRatio":1.7777777777777777,"numberOfImagesPerRow":1,"numberOfImagesPerCol":1,"groupsPerStrip":0,"borderRadius":0,"boxShadow":0,"gridStyle":1,"mobilePanorama":false,"placeGroupsLtr":true,"viewMode":"preview","thumbnailSpacings":4,"galleryThumbnailsAlignment":"bottom","isMasonry":false,"isAutoSlideshow":false,"slideshowLoop":false,"autoSlideshowInterval":4,"bottomInfoHeight":0,"titlePlacement":"SHOW_ON_THE_LEFT","galleryTextAlign":"center","scrollSnap":false,"itemClick":"nothing","fullscreen":true,"videoPlay":"hover","scrollAnimation":"NO_EFFECT","slideAnimation":"SCROLL","scrollDirection":0,"scrollDuration":400,"overlayAnimation":"FADE_IN","arrowsPosition":0,"arrowsSize":23,"watermarkOpacity":40,"watermarkSize":40,"useWatermark":true,"watermarkDock":{"top":"auto","left":"auto","right":0,"bottom":0,"transform":"translate3d(0,0,0)"},"loadMoreAmount":"all","defaultShowInfoExpand":1,"allowLinkExpand":true,"expandInfoPosition":0,"allowFullscreenExpand":true,"fullscreenLoop":false,"galleryAlignExpand":"left","addToCartBorderWidth":1,"addToCartButtonText":"","slideshowInfoSize":200,"playButtonForAutoSlideShow":false,"allowSlideshowCounter":false,"hoveringBehaviour":"NEVER_SHOW","thumbnailSize":120,"magicLayoutSeed":1,"imageHoverAnimation":"NO_EFFECT","imagePlacementAnimation":"NO_EFFECT","calculateTextBoxWidthMode":"PERCENT","textBoxHeight":0,"textBoxWidth":200,"textBoxWidthPercent":50,"textImageSpace":10,"textBoxBorderRadius":0,"textBoxBorderWidth":0,"loadMoreButtonText":"","loadMoreButtonBorderWidth":1,"loadMoreButtonBorderRadius":0,"imageInfoType":"ATTACHED_BACKGROUND","itemBorderWidth":0,"itemBorderRadius":0,"itemEnableShadow":false,"itemShadowBlur":20,"itemShadowDirection":135,"itemShadowSize":10,"imageLoadingMode":"BLUR","expandAnimation":"NO_EFFECT","imageQuality":90,"usmToggle":false,"usm_a":0,"usm_r":0,"usm_t":0,"videoSound":false,"videoSpeed":"1","videoLoop":true,"jsonStyleParams":"","gallerySizeType":"px","gallerySizePx":670,"allowTitle":true,"allowContextMenu":true,"textsHorizontalPadding":-30,"itemBorderColor":{"themeName":"color_15","value":"rgba(38,38,38,1)"},"showVideoPlayButton":true,"galleryLayout":2,"targetItemSize":670,"selectedLayout":"2|bottom|1|fill|true|0|true","layoutsVersion":2,"selectedLayoutV2":2,"isSlideshowFont":false,"externalInfoHeight":0,"externalInfoWidth":0.5},"container":{"width":670,"galleryWidth":702,"galleryHeight":0,"scrollBase":0,"height":null}}
1
23