‘Too much, too soon.’ Families rally at Capitol against sex education and LGBT curriculum

More than 200 protesters rallied Thursday outside of the state Capitol to protest the state’s push for comprehensive sex education and lessons on gender fluidity in California public schools. The rally, organized by Informed Parents of California, called for a rejection of California Board of Education’s proposed Health Education Framework, which they said teaches students too much information and too soon. The State Board of Education will vote to adopt the Health Education

Members of the New California State movement toured the coastal counties of Santa Cruz, Santa Barbara, San Luis Obispo, Monterey, Santa Clara and San Benito conducting meetings, town halls and training sessions. All these counties are members of the New California State movement and growing their base of members. The toured started in Santa Cruz county with two meetings early in the day on Tuesday March 26, 2019 which ended in a town hall in Santa Clara county. The tour con

The California Department of Water Resources is being forced by looming El Niño rainstorms to open the uncompleted Oroville Dam main spillway next week. The Department of Water Resources issued public reassurances on February 21 that uncompleted repairs at the Oroville Dam, which forced about 188,000 emergency evacuations after a near collapse in February 2017, are not a problem, since DWR did not expect the reservoir water level to rise enough to use the spillway anytime soo 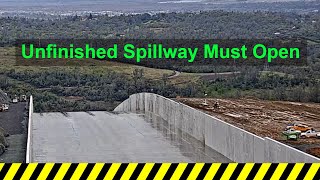 THE EPOCH TIMES California Resident Files Injunction to Prevent Blasting at Oroville Dam YUBA CITY, Calif.—A resident filed an injunction to prevent construction blasting using explosives near the Oroville Dam on March 22 at Butte County Superior Court, after becoming worried the public work could cause the collapse of the dam. The injunction was filed by plaintiff Paul Preston against defendant California Department of Water Resource (DWR). Oroville Dam, which sits at 770 fe

Original Publication February 20, 2019 The first “coup” in U.S. history in which government bureaucrats sought to overturn an election and to remove a sitting U.S. president has failed, a columnist noted. “Not thugs in sunglasses and epaulettes, not oligarchs in private jets, not shaggy would-be Marxists, but sanctimonious arrogant bureaucrats in suits and ties used their government agencies to seek to overturn the 2016 election, abort a presidency, and subvert the U.S. Const

AENN The day after Paul Preston, President of New California State and Liz Ritchie, Assembly Member from Contra Costa County and Chief of Staff for New California State spoke during a DeKalb, Ill. event, there was another event farther south in Illinois. It was billed as a “town hall” with 4 local state reps addressing some issues residents were really concerned about There were 1500 people there. REP. HALBROOK: WHO WANTS TO SEPARATE FROM CHICAGO? EFFINGHAM – A movement that

The $1.1 billion spent to repair Oroville Dam is failing as water is seeping through the rebuilt spillway threatens new mass evacuations over the risk of the dam collapsing. According to national dam expert Scott Cahill of Watershed Services of Ohio, Oroville Dam is on the same failure track as in 2017, with visible water seepage trickling from the foot of the dam and dozens of points along the dam’s principal spillway. Cahill warns that warming temperatures magnified by prec

Tip of the Progressive Iceberg

As might be expected, Gavin Newsom’s pronouncement that he was suspending the executions of death row prisoners during his term as Governor was hardly a surprise. As an outspoken opponent of capital punishment, we could expect no less from him. Newsom’s actions come despite the fact that California voters have three times affirmed their support of the death penalty since the California Supreme Court outlawed the practice in the case of the People vs. Andersonin 1972. Since

wp:paragraph March 14 (Reuters) - The U.S. college admissions scandal that erupted this week has triggered private litigation accusing rich, well-connected parents of buying spots for their children at prestigious schools, and keeping children of less wealthy parents out. A $500 billion civil lawsuit filed by a parent on Wednesday in San Francisco accused 45 defendants of defrauding and inflicting emotional distress on everyone whose "rights to a fair chance at entrance to co
{"items":["5f81ae1f49715f0017950474","5f81ae1f49715f0017950475","5f81ae1f49715f0017950476","5f81ae1f49715f0017950477","5f81ae1f49715f0017950478","5f81ae2381b38500173178d2","5f81ae2381b38500173178d3","5f81ae2381b38500173178d4","5f81ae2381b38500173178d5","5f81ae2381b38500173178d6"],"styles":{"galleryType":"Columns","groupSize":1,"showArrows":true,"cubeImages":true,"cubeType":"fill","cubeRatio":1.3333333333333333,"isVertical":true,"gallerySize":30,"collageAmount":0,"collageDensity":0,"groupTypes":"1","oneRow":false,"imageMargin":32,"galleryMargin":0,"scatter":0,"rotatingScatter":"","chooseBestGroup":true,"smartCrop":false,"hasThumbnails":false,"enableScroll":true,"isGrid":true,"isSlider":false,"isColumns":false,"isSlideshow":false,"cropOnlyFill":false,"fixedColumns":1,"enableInfiniteScroll":true,"isRTL":false,"minItemSize":50,"rotatingGroupTypes":"","rotatingCropRatios":"","columnWidths":"","gallerySliderImageRatio":1.7777777777777777,"numberOfImagesPerRow":1,"numberOfImagesPerCol":1,"groupsPerStrip":0,"borderRadius":0,"boxShadow":0,"gridStyle":1,"mobilePanorama":false,"placeGroupsLtr":true,"viewMode":"preview","thumbnailSpacings":4,"galleryThumbnailsAlignment":"bottom","isMasonry":false,"isAutoSlideshow":false,"slideshowLoop":false,"autoSlideshowInterval":4,"bottomInfoHeight":0,"titlePlacement":"SHOW_ON_THE_LEFT","galleryTextAlign":"center","scrollSnap":false,"itemClick":"nothing","fullscreen":true,"videoPlay":"hover","scrollAnimation":"NO_EFFECT","slideAnimation":"SCROLL","scrollDirection":0,"scrollDuration":400,"overlayAnimation":"FADE_IN","arrowsPosition":0,"arrowsSize":23,"watermarkOpacity":40,"watermarkSize":40,"useWatermark":true,"watermarkDock":{"top":"auto","left":"auto","right":0,"bottom":0,"transform":"translate3d(0,0,0)"},"loadMoreAmount":"all","defaultShowInfoExpand":1,"allowLinkExpand":true,"expandInfoPosition":0,"allowFullscreenExpand":true,"fullscreenLoop":false,"galleryAlignExpand":"left","addToCartBorderWidth":1,"addToCartButtonText":"","slideshowInfoSize":200,"playButtonForAutoSlideShow":false,"allowSlideshowCounter":false,"hoveringBehaviour":"NEVER_SHOW","thumbnailSize":120,"magicLayoutSeed":1,"imageHoverAnimation":"NO_EFFECT","imagePlacementAnimation":"NO_EFFECT","calculateTextBoxWidthMode":"PERCENT","textBoxHeight":0,"textBoxWidth":200,"textBoxWidthPercent":50,"textImageSpace":10,"textBoxBorderRadius":0,"textBoxBorderWidth":0,"loadMoreButtonText":"","loadMoreButtonBorderWidth":1,"loadMoreButtonBorderRadius":0,"imageInfoType":"ATTACHED_BACKGROUND","itemBorderWidth":0,"itemBorderRadius":0,"itemEnableShadow":false,"itemShadowBlur":20,"itemShadowDirection":135,"itemShadowSize":10,"imageLoadingMode":"BLUR","expandAnimation":"NO_EFFECT","imageQuality":90,"usmToggle":false,"usm_a":0,"usm_r":0,"usm_t":0,"videoSound":false,"videoSpeed":"1","videoLoop":true,"jsonStyleParams":"","gallerySizeType":"px","gallerySizePx":670,"allowTitle":true,"allowContextMenu":true,"textsHorizontalPadding":-30,"itemBorderColor":{"themeName":"color_15","value":"rgba(38,38,38,1)"},"showVideoPlayButton":true,"galleryLayout":2,"targetItemSize":670,"selectedLayout":"2|bottom|1|fill|true|0|true","layoutsVersion":2,"selectedLayoutV2":2,"isSlideshowFont":false,"externalInfoHeight":0,"externalInfoWidth":0.5},"container":{"width":670,"galleryWidth":702,"galleryHeight":0,"scrollBase":0,"height":null}}
1
23