Techlash to accelerate as globalism fades

Techlash to accelerate as globalism fades "Techlash" against omnipotent Silicon Valley corporate giants is accelerating as President Trump demonstrates that globalism is no longer a prime economic driver. FAANG tech giants that include Facebook, Amazon, Apple, Netflix, and Alphabet (Google) were almost worthless in 2000, but by March 20, 2018, the combined stock market capitalization of these companies reached an all-time high of $3.015 trillion. Presidents since George W. Bu 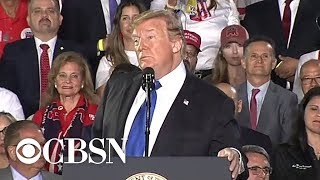 New California State is a 2nd Amendment state. No other state in the Union of States will have stronger support for the people's Right to keep and bare arms. "A well regulated Militia, being necessary to the security of a free State, the right of the people to keep and bear Arms, shall not be infringed".

OLYMPIA – Striding back and forth across the marbled Rotunda with the flag of the proposed state of Liberty behind him, Rep. Matt Shea drew a connection between supporting gun rights and splitting Washington at the crest of the Cascade Mountains. Despite all the talk he’s heard about “One Washington” around the Capitol, Eastern Washington and liberal downtown Seattle are very different, the Spokane Valley Republican said. Residents of the latter might support more government

Gov. Gavin Newsom announced the insolvent State of California is putting together a ‘Strike Team’ that could move to nationalize the assets of the bankrupt PG&E utility. Newsom told lawmakers in his State of the State speech, “We’re facing hard decisions that are coming due.” In his first month in office, Newsom has been dealing with a $7 billion tax shortfall since December, $1 trillion unfunded public employee pensions, President Trump threatening to withhold $9 billion in

Here it is New Californians: Gavin Newsom wants California to be its own nation-state in the Trump e

SACRAMENTO — Just five weeks into the job, Gov. Gavin Newsom has crystallized his vision of what California will look like in the Trump era: It won’t just be the hub of the resistance against the president; it will be its own nation-state. But before Newsom can create a country-within-a-country, he had to defuse two multibillion-dollar grenades that his predecessor, Gov. Jerry Brown, left in his in-box: high-speed rail and the delta tunnels project. In proposing Tuesday to sc

California Gov. Gavin Newsom’s missed budget in his first month in office by $1.81 billion on a $2.53 billion crash in personal income tax collections. Despite the State of California tax collection in December missing budget by -$4.82 billion, newly inaugurated Gov. Newsom proposed a record$144.2-billion spending plan for the 2019-2020 Budget on January 9 that included spending another $5.2-billion for "Cradle-to-Career" education, $1-billion for earned income tax credit fo

SPRINGFIELD, Ill. (WTVO) - An Illinois state representative has introduced a bill that urges the U.S. Congress to make Chicago its own state and not a part of Illinois. Rep. Brad Halbrook, of Shelbyville, filed the resolution HR0101 on February 7th, and it was co-sponsored by Rep. Chris Miller, of Robinson, and Darren Bailey, of Louisville. The bill claims the majority of the residents in downstate Illinois disagree with the City of Chicago on issues such as gun ownership, ab

What If There Were 42 Million at the Border?

Here's a good question about caravans: How many more are coming? Gallup asked the whole population of Latin America. There are 33 countries in Latin America and the Caribbean. Roughly 450 million adults live in the region. Gallup asked them, "Would you like to move to another country permanently if you could?" A whopping 27% said "yes." So this means roughly 120 million would like to migrate somewhere. The next question Gallup asked was, "Where would you like to move?" Of tho

Victims of Socialism in Venezuela Warn U.S.: ‘Don’t Fall for It,’ ‘People are Eating from Trash Bags

Venezuela Freedom Rally attendee in Washington, D.C. warns against socialism. (Screenshot) Victims of Venezuelan socialism who have come to America recently attended a Venezuela Freedom Rally in Washington, D.C., where Campus Reform asked them for their message to Americans who support socialism. “Bernie Sanders is your enemy. Do not ever, ever get involved with this individual or any of the other socialists,” one man who escaped Venezuelan socialism warned. “People are eatin 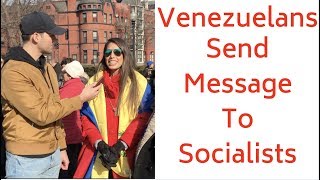